Constructing a Future: Wood Duck Boxes and You

Maryland is home to a rich variety of waterfowl species. We’ve all seen Canada geese honking their way from pond to field. Some of them endure the winter migration, and some of them are year-round residents who call Maryland home. Ever seen a wood duck? Well, much is the same with wood ducks, arguably the most beautiful duck native to North America.

Wood ducks nest in tree cavities near water and utilize wetlands as their home to raise their young. Unfortunately, as urban sprawl occurs, more and more of these wetlands are being destroyed, limiting the wood duck’s habitat and success in Maryland. Don’t lose faith. A lot is being done to bring the population back to where it once existed. You can become part of the effort too, and it doesn’t take much.

Wood ducks suffered a serious decline in the late 19th century for a variety of reasons, including habitat loss and market hunting for their meat and plumage.  Because of the Federal Migratory Bird Treaty Act of 1918, market hunting was ended and measures

were enacted to protect remaining habitat. Wood duck populations began to rebound in the 1920s, and the development of the artificial nesting box and its implementation by Federal and State governments and local wildlife enthusiasts in the 1930s began providing an additional boost to wood duck production. The hope was that the ducks would utilize the “cavity” characteristic of the boxes to nest. The ducks did, and they made an astounding comeback. Nesting sites are only half the battle, though. Woods ducks also require wetland habitat that provides them with shelter, food, and protection from predators. If you have a wooded stream or pond on your property or if you live along a Chesapeake Bay shore with woods nearby (which is alot of you!), you may be able to attract wood ducks simply by constructing a nest box.

Building a wood duck box is simple, inexpensive, and there are plenty of plans you can find online that detail designs, placement, etc. Do your h

omework.
The Maryland Wood Duck Initiative, an all-volunteer effort,  aims “to enhance Maryland’s wood duck population and to generate a greater appreciation of the wetland habitats in which they live by advocating and demonstrating the merits of a “best practices” approach in managed nest programs.” State agencies like the Department of Natural Resources, conservation organizations like Ducks Unlimited, and companies like Patriot LWM are other important resources for anything wood duck related and are more than happy to  provide you with information and help develop your wood duck plan.

So, now for some more timely information. What are wood ducks doing right now in Maryland? Wood ducks nest from April to June, so right now is a great time to get your nesting boxes built, or cleaned out if you already have boxes (if you’re anything like me, you’re tired of being cooped up in the house and are itching for a reason to get outside and do something).  Add a few inches of wood shavings (don’t use sawdust because it can suffocate the ducklings) for nesting material, attach the boxes to poles (don’t forget the predator guards!), and place them around forested areas near the water for when they arrive. You’ve now become a part of the effort! The rest is up to the ducks.

If a wood duck finds your box suitable for laying eggs, in about 1 month 9-12 eggs will hatch and, within 24 hours, the ducklings will use their sharp claws to climb to the nest box entrance and fall to the ground or water.  Once on the ground, the femal 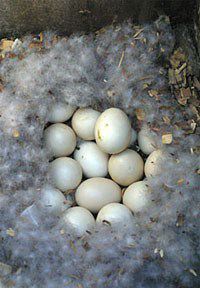 e will lead the ducklings to the nearest body of water (they won’t come back to the nest, don’t take it personally). Wood duck young can fly in about 60 days from hatching; meanwhile, their mother looks after them and protects them from harm*courtesy of Maryland DNR*.  It’s always a good idea to check your nesting boxes once during the nesting season to clean them out and add new nesting material. Besides doing some housekeeping, a visit during the nesting season will show if your nesting boxes have been productive and improve the odds of the box being used again during the season.

So there you have it. You made an effort and it didn’t take much, did it? Enjoy the feeling that comes from conservation, and share it with a child – they are our future conservationists. And every time you catch a glimpse of a wood duck’s beautiful iridescent plumage or hear their unmistakable “ooo-eeekk” squeal echo through the woods or across the water, consider it a “Thanks.”

If you’d like to get a fully assembled wood duck box and predator guard contact Patriot LWM at 240-687-7228.